Ryner is the Protagonist of the show and of the DYD and DDYD novels.

He possess the Alpha Stigma, a power who gives him the ability to analyze and copy any magic he see used.

He is know as the "Deadliest Magician of Roland".

Ryner has a tendency to distance himself from others because he does not wish to cause harm and grief to them due to his eyes and vice versa. He has caused multiple girls throughout his life to fall in love with him, though he is reluctant to love again after his first love sacrificed herself to save him. He has, however, formed strong attachments to both Keifer and Ferris. After encouragement by Ferris during his temporary departure from Roland, Ryner gains a will to live while accepting the fact that he is a monster, a fact that he has been avoiding.He is a demon god.

Based on volume 4 of DYD, Ryner’s first concrete memory is waking up on a battlefield. He has no memory of anything except his name. Talrome takes him to his home in the bandit village. He starts living and working there.

Although life is very rough, Ryner is happy because he has friends. One day, a Roland noble named Alrome comes to the village. When his soldiers are about to take Quill, Deel attacks them and is instantly eradicated when the soldiers use the spell “Kurenai”. 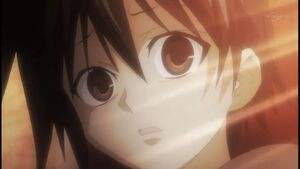 Seeing this, Ryner activates his Alpha Stigma, chasing away the soldiers and saving everyone. Ryner is really happy that he was able to use his power to protect everyone he cared about. However, the other villagers look at him like he’s a monster—not acknowledging that he had just saved everyone. This is the first time Ryner realizes he’s a monster because of his Alpha Stigma.

Ryner came here when he was fifteen years old; this is where he first met Sion Astal.

Undertaking a quest from his trusted friend and the new King of Roland, Sion Astal, and in the company of swordswoman Ferris Eris, he travels across the continent of Menoris in search of the "Relics of Heroes (勇者の遺物, Yūsha no Ibutsu)", legendary artifacts later more accurately and collectively known as "Rule Fragment (忘却欠片, ルール・フラグメ, Rūru Furagume)" and "Rule Phajeel (忘却神器, ルール・フアジール, Rūru Fuajīru)."

The undertaking was a result of his own research report into the "Relics of Heroes," with the vision of creating a world with no wars and conflicts.

After he returns from his quest, he notices a greater power eating into Sion from within. He eventually unravels a series of conspiracies throughout Roland and its neighboring countries, and discovers a greater force at work.

Later, after being betrayed, and with the desire to save his friends, he escapes Roland with Ferris Eris, carrying the hope that Sion Astal can still be saved, eventually traveling with the Anti-Roland Coalition.

His magical prowess does not stem solely from his Alpha Stigma, and he was judged by his master Germer as one who possesses a natural high level of comprehension ability and an acute sense in magic.

The Alpha Stigma is one of the four curses that was passed on to humanity from the Dark Gods of ancient times.

The alpha stigma gives the user the ability to analyze and copy any magic they see used, even only partially completed spells as demonstrated by Ryner when fighting the spies from Gastark. It is even shown that not only can Ryner copy magic but it seems he empowers it as well as seen in episode 1 and in the light novel he can overpower dozens of other mages while using the same spell as they are.

Alpha Stigma bearers are often shunned and called "monsters" as once they go berserk and lose their sanity, they will start killing and destroying indiscriminately and never to return to their senses again. Ryner is thus grateful towards Sion, Ferris, and Kiefer because of their acceptance of him as a human being despite their awareness of him being an Alpha Stigma bearer. Ryner cares about other Cursed Eyes Bearers not wanting them to suffer as he did. He once rescued Arua, a child bearing the Alpha Stigma, from being executed by the Runa Empire. During his time with the God's Eyes group, he thought about staying there and helping the children there because he feels that unlike him, they are still innocent and are worth saving.

Moreover, he is regarded as an anomaly because he is the only person to have been able to regain his sanity after losing control of his Alpha Stigma. As such, even after going berserk and killing many innocent, he was allowed to live as a rare research subject. This is mainly because he carries half of the essence ("The Lonely" portion) of the legendary demon lord known as "The Lonely Demon (寂しがりの悪魔, Sabishigari no Akuma)," which was implanted by his own father, Lieral, in order to save him from what would normally be the doomed fate of an Alpha Stigma bearer.

In most cases of alpha stigma bearers they don't live past their childhood, when an alpha stigma bearer is put under extreme emotional distress they activate the madness of the alpha stigma and cause themselves to destroy every one/thing around them including themselves, and is almost always irreversible unless acted upon immediately after activation (closing their eyes).

When Ryner was a child through some ritual performed by his father and the sacrifice of his mother he made a contract with the goddesses and place a seal on his alpha stigma, allowing him to deactivate it with enough will power. The ritual his father performed also placed a Dark God within him, when his madness is activated the Dark God takes over and makes him several times more powerful than a typical alpha stigma user, it also gives him the power to dematerialize anything he sees (demonstrated in his fight against the Estanbul soldiers and the Gastark spies).

Because most Alpha Stigma users don't live past their childhood, they are not able to activate the true power of the Alpha Stigma. By the end of the series, Ryner had just begun learning about the special power he possesses. It was mentioned by Ril Orla that he was "The Solver of All Formulas" it was also mentioned later by Sion and Lucile in mysterious contexts. Sion had also said that he wanted to kill Ryner before his true power activated, so he could save Ryner from his fate before he became immortal and forced to walk the desolate and fiery war torn waste lands alone for all eternity.

• According to DYD: Volume 3- Ruthless Sleep Disturbance, Ryner claims that he likes the tea that Ferris makes when they are eating dango.
• Claugh, Ferris, and Ryner are the only ones who do not use any suffixes when addressing Sion.
• Ryner gets his lack of motivation and sleepy eyes from his father
• According to DYD: Volume 4 - The Feast of Cleaning, Ryner tells Ferris he has no memories of his parents or his childhood, but he feels he is roughly 19 years old.
• No matter how much he shouts or complains, Ferris usually ignores him once their usual banter has reached an end. Nevertheless, Ryner is really enjoying her company.
• Ryner hates red skies because they remind him of things he wants to forget; likewise he also dislikes evenings. (DYD: Volume 4 - The Feast of Cleaning)
• Ryner rarely impresses Ferris; one instance is when she was writing a book, and he commented that although he’s not a writer, he thinks she needs a “setting page”. (TDYD Vol. 6 “The Forbidden Book”)
• In the novel Ferris writes, she is the hero Ferris Eris and the heroine is Ryner. They “play out” several scenes in reality as well along with their usual banter. They send a copy to Sion with a request for instant publication; this just makes Sion laugh. Instead he turns their “stories” into two picture books “The Failure of the Gluttonous Princess” and “The Story of the Sleepyhead”. The books sold really well, and all the money went to Iris Eris for drawing the illustrations. Ferris and Ryner, however, were really upset about the plots developments. (TDYD Vol. 6 “The Forbidden Book”)

Community content is available under CC-BY-SA unless otherwise noted.
Advertisement